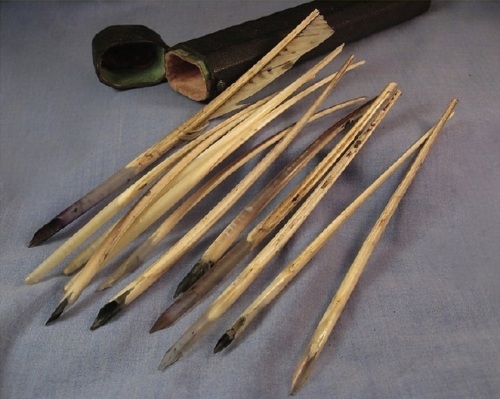 From the dark ages until the advent of steel nibs and fountain pens in the nineteenth century, the quill pen dominated western writing. Although now the domain of the hobbyist, the quill nonetheless retains its romance, artistic flexibility- and the skill needed to handle it as a writing implement. In handbooks for the modern scribe, there are invariably instructions for heat tempering quill pens, a process called ‘dutching’. As with most aspects, the assumption is that this was a historical practice. Yet curing a quill with sand is a relatively modern phenomenon, dating only to the mid-eighteenth century: throughout the great ages of the medieval manuscript, pens were prepared by ageing, selection and cutting.

In common with many professions, manuals and treatises were written throughout the later middle ages: the earliest printed book to appear Sigismondo Fanti’s Theorica et Practica in 1514, dealing with handwriting and lettering. None mention dutching, but agree that age curing is needed to turn feathers into pens. Giovanbattista Palatino in 1540 recommends selecting a quill that had already become hard and clear with age, from which the fatty membrane should be scraped away with the pen knife, and also not to rub it with a cloth. Juan Vives in 1538 suggests this be done by rubbing the quill inside the jacket or on the thighs of the hose. Fanti and Tagliente (1524) both recommend scraping with a knife. Hamon in 1567 talks about selecting a barrel which is clean, dried and not greasy; Scalzi in 1581 specifically warns not to use quills that are too fresh, recommending a year old. This continues right on with Billingslie in 1618, the same method in Shelley in 1714: even Bradbury writes in 1815 that ‘it is age best mellows and meliorates a quill’.

It is notable that air dried quills seem quite durable: in 1630 Philemon Holland poetically claimed that he wrote out the whole of his translation of the Moralia without needing to recut his (pre-loved!) quill: “…This Booke I wrote with one poor Pen, made of grey Goose quill, A Pen I found it, us’d before, a Pen I leave it still.” 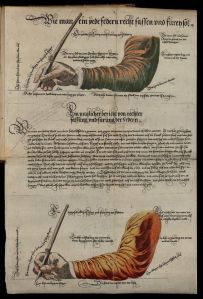 The first references to heat curing occur in 1760, referring to quills shipped from Holland in an already clarified condition: the newly-invented process, soon adopted elsewhere, became known as “dutchifying” or “dutching.” These quills were prepared by being placed in a moist cellar for several hours, their points in the damp earth, or wrapped in a wet cloth. A hole about six inches deep was then made into a coal fire; the quill was then inserted into the space. After a few seconds the quill was placed on a metal plate and draw beneath a dutching hook, a flat metal tool that flattened the barrel, removed the outer covering and any oily surface, and shrivelled the inner membrane. The heat and pressure caused the explosive release of heated air form the tip of the quill, accompanied by a sharp sound, known in the trade as ‘snapping’. Any remaining oil or membrane were removed by rubbing with the skin of a dogfish.

By the 1830s, a simpler method had come into use wherein the quill was soaked in water for several hours, before being plunged into hot sand or ashes, and is the basis for the method used by modern calligraphers, Quills were sold in small bundles ‘dutched’ but uncut, or purchased from pencutters ready for use. Mechanical nibbers appeared in France around 1820, with the most popular being patented by Joseph Rodgers in England in 1835, meeting “the decided approbation of the first penmen in this Kingdom.”